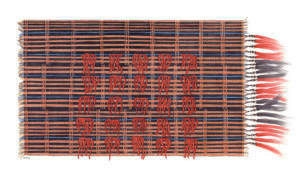 There was a time, at the beginning of the 20th century, when the Nagas settling in the borderlands of Northeast India and Northwest Mayanmar (Burma) were feared as head-hunters. Their rituals featured lavish feasts of merit and their material aesthetic convinced with a unique style of design. Through British colonial administration, Baptist mission, and a battle for independence that has lasted for more than 60 years, Naga culture has changed dramatically since then. The fight for Naga independence, which went largely unnoticed in the rest of the world, had lead to a total closure of the region for outsiders until a few years ago. Looking at Nagaland today – the Indian state in which most of the Naga groups live – only a few cultural features of pre-colonial traditions have survived; one of them is the textile tradition.

My dissertation thesis analyses the relation between the visual design, the technical production, and the cultural and social meanings of the textiles of the Nagas. A main argument is that the formal, visual designs of locally produced textiles once were directly linked to the core cultural and social concepts of the Nagas. The textiles were meant to make a rather precise statement about the social standing of its wearers. In times of colonialism, when the first monographs about the Nagas were written and the large museum collections were assembled, the messages of the designs of the cloths could be formulated, which is to say woven, and read by the local people in a precise and detailed manner. A central aim of the thesis is to decipher the erstwhile ‘language’ of Naga textile design. It is further argued that changes in the course of history in both textile design and the cultural and social context had not resulted in the link between former design and meaning being totally undone. Those cloths which were once considered to be simply normal Naga dress have today become so-called ‘traditional’ textiles. In present times the former meaning of their designs has become concentrated or generalised, and it has seen some additions. But the core statements of the designs are still understood and their effects are used in new contexts today. The textiles which are nowadays understood as traditional are at the centre of the study. But also new designs, albeit woven with the local technique and locally termed ‘design’ textiles, will be considered. The statements made by their patterns is by no means as precise as that of the traditional textiles, but it will be shown that there is a rough similarity to the overall meanings, which mainly centre on notions of honour, status, and social structure.

The thesis approaches the topic from two perspectives: The macro-perspective attempts to give an overview over Naga textile design and weaving techniques in general. In this context also questions of the visual representation of material culture and of the embodiment of cultural techniques are reflected. The micro-perspective looks at the meanings encoded in the textile design of one particular Naga group, the Ao Naga. Here I focus on a detailed semiotic analysis combined with some considerations from fashion theory. Methodically, two principles were of importance for the project: First a continuous mutual feedback was maintained between the historical collections and monographs dating from the beginning of the 20th century with my data obtained in current research. Second intensive use is made of visual data (photographs and scientific drawings) in all steps of the work: in field research, in analysis, and finally in the presentation of the results. An important approach was to produce ethnographic drawings.

Facing a growing fashion industry, many Nagas fear that globalization and marketing will make them loose the intellectual property rights of their textile designs. I hope that for the local community this research will therefore have an importance as regards the detailed documentation of their textiles. Because of a 60 years gap in research in the region there is a backlog in international scientific work about the Nagas. Hence, the importance of this project for the scientific community lies not least in its pioneering attempt to re-animate anthropological research in the region. Until the beginning of 2011 Nagaland could only be entered with a special permit. Now much of the Northeast of India including Nagaland can be travelled with a normal Indian visa. It is expected that this change will again have major influences on Naga culture.

The research for this dissertation was part of a larger research project “Material Culture, Oral Traditions and Identity among the Naga of Northeast India“, funded for four years (2006-2010) by the Swiss National Science Foundation.

Publications by Marion Wettstein on textiles and fashion in Northeast India: 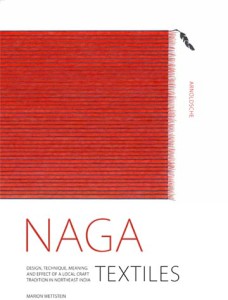